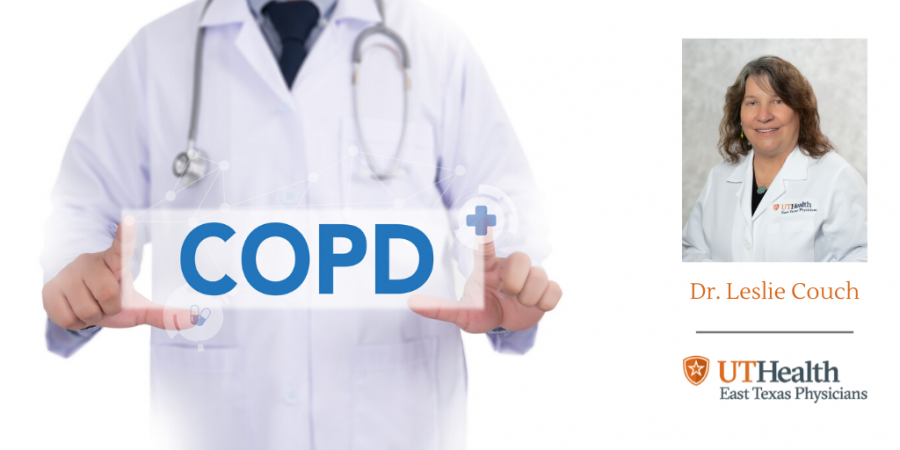 Chronic Obstructive Pulmonary Disease, commonly referred to as COPD, is a chronic inflammatory lung disease that causes obstructive airflow. COPD is a disease that involves constriction of the airways and difficulty or discomfort in breathing that affect the lung functionality of over 16 million people in the USA. Even more suffer from COPD without being diagnosed.

“It frequently is a combination of chronic bronchitis and emphysema. COPD ranks as the third most common cause of death. The number one cause of COPD is cigarette smoking, either a current or former smoker,” said Dr. Leslie Couch, a pulmonologist with UT Health East Texas Physicians. “Other causes of COPD can be a genetic disease alpha one antitrypsin deficiency where the person does not produce a protective protein in the lung, thus destroying lung tissues, as well as certain chemical and dust exposures (occupational lung disease), air pollution, and in the developing world indoor pollution from cooking and heating in poorly ventilated homes.”

Although there is no cure, this disease progresses slowly and patients who seek help can be prescribed treatments that will slow the disease and make it easier to breathe.

UT Health East Texas Pulmonary Institute has physicians with expert knowledge and experience in treating COPD. These pulmonary experts share their knowledge in hopes of bettering the quality of life for people with COPD.

The Effects of COPD on the Lungs

Within normal lungs, the bronchial tubes branch into thousands of smaller, thinner tubes called bronchioles that end in bunches of tiny, round air sacs called alveoli. Small blood vessels, called capillaries, run through the walls of the alveoli. When air reaches the alveoli, oxygen passes through the walls into the blood in the capillaries. At the same time, carbon dioxide moves from the capillaries into the alveoli. This process is called air exchange. The bronchioles and alveoli are elastic. With inspiration (inhaling or breathing in), each alveoli fills up with air like a small balloon. With expiration (exhaling or breathing out), they deflate and the air goes out. In COPD, less air flows in and out of the airways because of one or more of the following:

COPD can have seemingly benign symptoms, such as a nagging cough, so people suffering from this disease often avoid seeing a physician. However, since treatments can slow the disease and improve quality of life, it’s important to know what to look out for and get tested.

COPD is diagnosed based on signs and symptoms. Be aware if it’s an ongoing cough, how long it’s been present, how much or how often you cough, and how much mucus is produced. Recall details such as medical and family histories, including questions regarding smoking history, contact with lung irritants, such as secondhand smoke, air pollution, chemical fumes or dust. The main test for COPD is spirometry, which measures the amount of air and how fast the air can be breathed out. Other tests include a chest X-ray or a CT scan that can show signs of COPD. An arterial blood gas test (ABG) helps determine the severity of COPD and whether oxygen therapy is needed. Also, a six-minute test is used to determine exercise tolerance and to qualify a patient for oxygen therapy.

After getting tested, there are a lot of lifestyle changes a patient can make that will improve their functionality and overall health.

The first step in slowing disease’s progression is to prevent exposure to harmful lung irritants, such as cigarette smoke, heavy dust, fumes and air pollution. After that, slow changes should be adopted into your everyday routine, including how you eat, exercise and get around your home.

You should eat smaller, more frequent meals; rest before eating, and take vitamins or nutritional supplements as well. Physical activity can strengthen the muscles that help with breathing and improve overall wellness, but do activities slowly. Put frequently used items in one place that’s easy to reach, find simple ways to cook, clean and do other chores. Use a small table or cart with wheels to move things around and a pole or tongs with long handles to reach things. Ask for help moving things around your house so that you don’t have to climb stairs as often. Keep clothing loose, and wear clothes and shoes that are easy to put on and take off. Don’t forget to also ask friends and family for help with daily tasks.

Help from Your Community Providers

There are whole programs, departments and providers dedicated to helping those who are affected by COPD and other lung diseases. Our physicians, along with many other experts, are continually researching COPD, looking for ways to relieve symptoms, slow and eventually eliminate this disease.

UT Health East Texas has a lung (pulmonary) rehab program with the physical therapy department that can help patients learn to manage the disease. A team of health professionals can provide counseling, teaching and research for patients diagnosed with COPD. We are always looking for research participants to assist our organization in finding better treatments and even cures for disease processes. I would highly encourage anyone who might be interested in being involved with pulmonary research call 903-877-7916 so that we can assist in getting them enrolled in research studies.